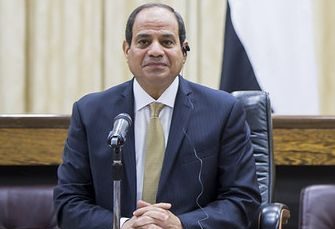 EGYPTIAN  President Abdel-Fattah al-Sisi has approved legal amendments that restrict retired army officers from running in elections without permission from the military, according to an announcement in the official gazette on Wednesday.

Critics of Sisi, a former army chief who was re-elected for a second term in 2018, say the amendments, passed by parliament this month, aim to curb any opposition from prominent former army generals. The government denies this.

The amendments bolster the role of the army by allowing it to offer an opinion on proposed constitutional amendments and bills related to political rights, elections and national security, according to the announcement.

The legal changes also make it obligatory for the defence minister to appoint a military adviser to the governors of each of Egypt’s 27 provinces.

Previously, only serving army officers had been restricted from entering politics or standing for election without permission from the military.

“Officers on active service or those whose service has ended are not allowed to run for the presidential, parliamentary or local elections except after the approval of the Supreme Council of the Armed Forces,” the announcement said.

Former military chief-of-staff Sami Anan, seen at the time as Sisi’s main challenger, was arrested in 2018 after the military accused him of seeking to run in the presidential election without permission. He was released last December.

The army said at the time of his arrest that Anan was called back to duty after retirement. Anan’s spokesman denied that he broke any laws.

Under Sisi, the army has expanded its role, including in the economy, where firms it controls are active from food to cement production.

The new amendments have been criticized by human rights lawyers. But Ahmed al-Tantawy, a senior member of a small opposition bloc in parliament, told Reuters that the group voted for the changes, supporting the government’s view that they were aimed at “preserving the country’s national secrets”. – Thomson Reuters Foundation.