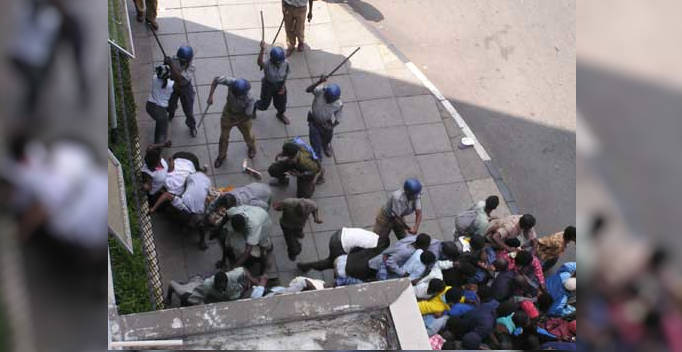 STREETS were deserted and businesses shut in Zimbabwe’s two main cities on Friday after security forces were deployed to prevent anti-government marches called by activists over corruption and economic hardship.

Protesters stayed away. Job Sikhala, an opposition lawmaker and one of the protest organisers, said the heavy security presence showed a state afraid of its citizens. He added: “Protracted demonstrations will be the way forward.”

He is among more than a dozen activists who are in hiding and who police say they are seeking for promoting Friday’s protests.

In Bulawayo and central Harare, the capital, businesses were shut as police and soldiers patrolled the streets. Shops also stayed shut in some Harare townships, including Mbare – a hotbed of past protests.

President Emmerson Mnangagwa has said the protests constitute an “insurrection” by the opposition.

His ZANU-PF party this week branded the U.S. ambassador in Harare a “thug,” accusing him of funding protests. Brian Nichols has criticised the government for failing to tackle corruption and for persecuting opponents.

Mnangagwa’s opponents say his government is resorting to the authoritarian streak of the Robert Mugabe era of banning protests, and abducting and arresting critics.

Popular anger has risen over an economic crisis marked by inflation running above 700%, shortages of foreign currency and public hospitals crippled by strikes and a lack of medicine.

Scores were killed during a crackdown on the last major protests in January 2019. Opponents say Mnangagwa is exploiting a COVID-19 lockdown to stifle dissent, after he imposed an overnight curfew and restricted free movement last week.

“We have many grievances but can’t go out to protest because we will be beaten,” said Patrick Charinga as he filled petrol at a fuel station in Harare. – Thomson Reuters Foundation.