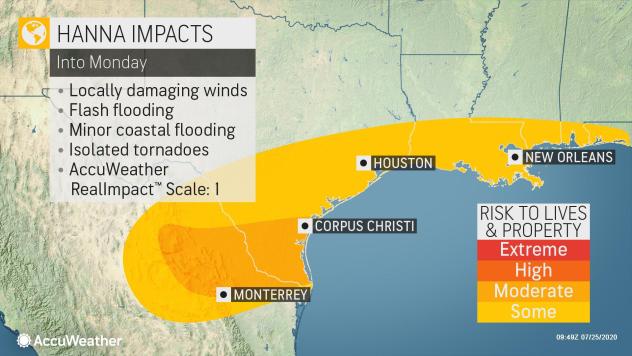 HANNA, the first hurricane of the 2020 Atlantic season, left a trail of destruction along the Texas coast on Sunday, downing power lines, flooding streets and toppling 18-wheeler trucks as torrential rains threatened the area.

Hanna came ashore on Padre Island on Saturday afternoon as a Category 1 hurricane on the five-step Saffir-Simpson scale of intensity and later made a second landfall in Kenedy County, Texas. It swept through a part of the state hard hit by the coronavirus pandemic. By Sunday, it had weakened to a tropical depression.

Powerful winds from Hanna knocked over at least three 18-wheeler trucks and a recreational vehicle, with tow trucks trying to right the toppled vehicles on Sunday, shutting down a 2-mile (3.2-km) stretch of U.S. Route 77 in Sarita, Texas, near the Mexican border.

In Port Mansfield, 150 miles (240 km) south of Padre Island, winds flattened sugarcane fields and leveled trees. Deer roamed the streets, stopping to nibble downed branches in the yards of homes, some that lost their roofs.

Heavy downpours of more than a foot (30 cm) of rain flooded roadways and swelled streams and rivers across south Texas, the National Weather Service said.

There were no immediate reports of injuries.

“You could hear the wind blowing and the rain blowing and you looked outside you could see sheets of water blowing down the street,” said Sharon Pecce, 75, a resident of Port Mansfield, whose roof was ripped off her house on Saturday night.

“It’s scary to go through this at my age, a lot could have happened … we could have been killed,” added Pecce, who was at a friend’s home with her 70-year-old husband when the damage occurred. “We are lucky we weren’t there.”

Roderick Kise, a spokesman for U.S. Customs and Border Protection in the Rio Grande Valley, told the Caller Times newspaper in Corpus Christi that his agency was looking into a report that winds toppled a newly constructed portion of the border wall built between the United States and Mexico.

At one point, more than 283,000 homes and businesses were without electricity. But that figure fell to 98,000 by Sunday night, according to poweroutage.us.

The storm was not expected to affect offshore oil-and-gas production. Energy companies have not evacuated workers or shut down production from their Gulf of Mexico platforms because of Hanna.

Some residents took advantage of the wild weather, with Alejandero Carcano, 16, and Jesse Garewal, 18, both of Galveston, surfing the high swells whipped up by Hanna.

Governor Greg Abbott said in a statement on Sunday that the Federal Emergency Management Agency declared the storm a federal emergency and would help fund evacuation and shelter efforts.

“I continue to urge Texans to heed the guidance from their local leaders and follow best practices to keep themselves and their loved ones safe as severe weather continues to move through our communities,” he said.

The Texas area struck by Hanna has struggled to contain outbreaks of COVID-19 in recent weeks. Cases along the state’s coast have soared into the tens of thousands.

More than 440 people in the Corpus Christi area were hospitalized with the illness, according to the state health department.

The storm’s top sustained winds were around 35 mph (56 kph), the center said.

The storm was forecast to lose more steam as it moved across Texas and northeastern Mexico. On Sunday, weather watch officials canceled a storm surge warning they had issued for the Texas coast.

Hanna still posed a threat, forecasters said, noting it could dump upward of 18 inches (45 cm) of rain in isolated areas of southern Texas through Monday.

In the Pacific, Hurricane Douglas was churning near Hawaii on Sunday, with torrential rains and damaging winds. – Thomson Reuters Foundation.