ZAMBIAN president Edgar Lungu has led Zambians and Africa in prayers for Dr Kenneth Kaunda, the country’s 97-year-old founding president who has been admitted into hospital for suspected COVID-19 related illness.

“I call on the nation to pray for our beloved KK who is hospitalised that God may touch him with his healing hand. He stood up for this great nation as its most critical moment and so we can all stand up for him in his moment of weakness,” said Lungu.

The Zambian president assured the nation that the government was doing all it can to ensure that Kaunda gets the best possible medical care.

Moussa Faki Mahamat, chairperson of the African Union Commission said: “We join the people and the government of Zambia in prayer for the speedy and full recovery of H.E. Dr Kenneth #Kaunda, the first president of the Republic of #Zambia and the only remaining Founding Father of the Organisation of African Unity, the forerunner to the African Union.”

South Africa’s president and former chairperson of the African Union Cyril Ramaphosa said: “We have received the news that His Excellency Dr Kenneth Kaunda, first President of the Republic of Zambia, is not well and has been admitted to hospital. We join HE President @EdgarCLungu and the people of Zambia in prayer for President Kaunda’s speedy and full recovery.”

Kaunda is receiving treatment for an undisclosed illness at a military hospital in the capital Lusaka, his office said on Monday.

Kaunda ruled Zambia from 1964, when the southern African nation won its independence from Britain, until 1991. He is among the continent’s few surviving liberation heroes.

His administrative assistant Rodrick Ngolo said in a statement that Kaunda had been feeling unwell and had been admitted to the Maina Soko Medical Centre in Lusaka.

“His Excellency Dr Kaunda is requesting all Zambians and the international community to pray for him as the medical team is doing everything to ensure he recovers,” the statement said. – African Mirror Reporter and Thomson Reuters Foundation 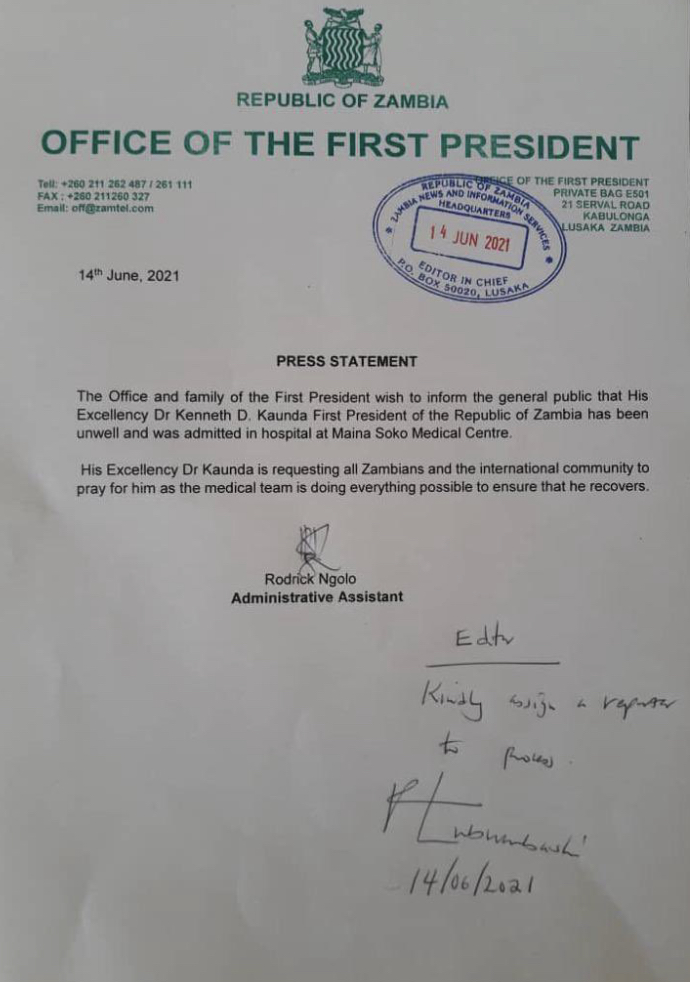